ENPRODE’s Responsibilities;
Conceptual Engineering and Design. Next Power is a Bulgarian Independent Power Producer (IPP) company and Group Five (http://www.g5.co.za)  is  a  South  Africa originated global construction group, who is the EPC Contractor of Next Power Mramor Bulgaria Combined Cycle Power Plant (CCPP) Project and 50% shareholder of Next Power, as well.
The Project was mandated on a develop, build and commission basis as a Combined Cycle Power Plant (CCPP) in Mramor, Bulgaria, 10 km to the capital Sofia, with an estimated installed capacity of 115 MW. The total power generation capacity of the plant is based on 2x44MW output from the 2 Gas Turbine Generators (GTG) and 27 MW from a Steam Turbine Generator (STG), which was driven by steam that is to be generated by 2 vertical- type Heat Recovery Steam Generators (HRSG) utilizing the waste heat coming from the exhaust of the 2 Gas Turbines (GT). The plant also accommodated an Air Cooled Condenser (ACC), a Natural Gas Compressor Station, a Water Treatment Plant, a 220 kV Switchyard and Transformers, Single fuel natural gas was used as fuel to run the Power Plant to generate power on base load.

The generated power at the terminals of the GTGs and STG was planned as 11,5 kV at 50 Hz. Each generator was connected to the Bulgarian National Grid via three separate Step-up Power Transformers at 220 kV voltages, and designed to meet all the requirements of the Bulgarian National Grid Code. ENPRODE was mandated for Conceptual Engineering & Design of Mramor CCPP project in December 2008. Conceptual Engineering & Design was successfully completed in April 2009. 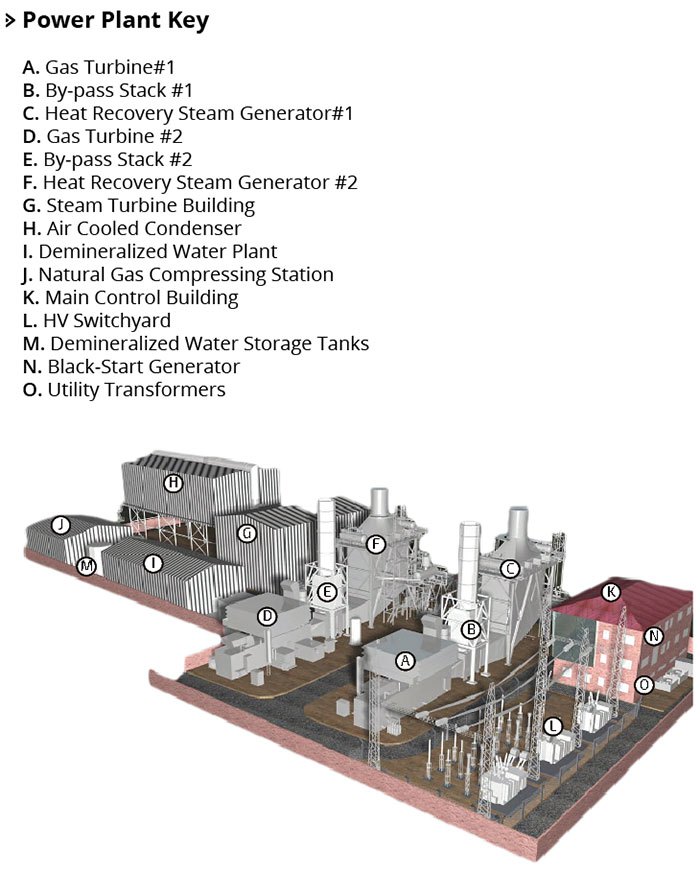